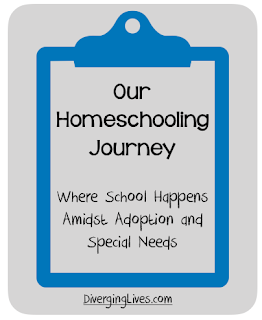 As most of you know, we have been homeschooling for the past 16 years, in some form or another.  We began our homeschooling journey when our oldest children, DJ and Adriana, were entering 5th and 3rd grade respectively. We chose to homeschool through a local charter school and it was a good fit for us. In 8th grade, Adriana decided she wanted to go to public school and we agreed. Our neighborhood was opening a brand new high school the following school year and our schedule was getting increasingly busier with the addition of our three boys. Adriana attended public high school and went on to graduate from there, while DJ graduated from the charter school. Both were the right fit for each of them.


Since our younger boys all had special needs and required a lot of therapy, they were all enrolled in public school for preschool and their early elementary years. We went on to adopt again in 2008, this time a baby girl. In 2010-2011, we were having a lot of IEP meetings with the school district to communicate the needs of our boys. There just seemed to be a lack of understanding from the administrators and the particular teachers that year, as well as denial that any of what we were saying as parents could be true. The boys would come home from school so overstimulated that we would end up dealing with behaviors until bedtime. For one of our boys, we were finally able to get more supports by the end of the school year, but we were told those supports would be scaled back the following school year. We had enough and decided to homeschool the boys the following school year. We felt that it was important to let the boys finish out the current school year, as they only had a couple of weeks left.

In the Fall of 2011, we began a new journey of homeschooling. We decided to homeschool our boys independent of a charter school and filed an affidavit with the Board of Education. In our state (California) we were required to keep attendance. Of course I kept all of their school work too in case there was any question of if we were really “doing school”. We began by exploring themes and creating projects as we were learning. Lots of hands-on fun! You can check out our posts on the ladybug life cycle, the solar system, ocean diorama, fun with flubber, ocean diorama, killer whale costumes, and much more! We also did a lot of practicing our social skills, from learning how to order meals at a restaurant to exploring local museums. We concentrated on toileting skills as none of the boys were toilet trained yet. Yes, even in grades 1st, 2nd and 4th. We also found a great program called Autism Center for Excellence (ACE) for children who are on the autism spectrum. It was at Sacramento State University which was only 30 minutes away from our house and Alex began attending 3 days a week. Since James still had an open cleft palate despite 3 surgical repairs, he required intensive speech therapy. We had him attend the Maryjane Rees Language, Speech and Hearing Center at Sacramento State University for a semester. Unfortunately he was also diagnosed with selective mutism and anxiety, so he would not speak outside our home or to unfamiliar people. It's incredibly difficult to do speech therapy with a student who refuses to speak!


During that first year of homeschooling independently, we happened to move. Since our boys still required additional therapy, we sought help from the new school district. We went through the IEP process and were granted services under an ISP (Individual Service Plan), since we elected not to enroll the boys in school. We found this to be very helpful and I accompanied the boys to speech and OT at the local elementary school. That only lasted a year as we moved again.

Then came the educational experience of a lifetime...a cross country trip during the summer of 2013. We were on the road for 2 months and were able to visit locations such as Yellowstone, Mount Rushmore, the arch in St. Louis, Niagara Falls, Statue of Liberty, Washington D.C., Myrtle Beach, Disney World in Florida, the Riverwalk and Alamo in San Antonio, TX, and the Grand Canyon. During the school year prior to this trip, we studied US History so the kids would have some background information. We even took part in a postcard swap where we sent 49 post cards from our state (California) and received post cards from a family who had been assigned to each of the other 49 states. As each post card was received we colored in the state it was from on a map of the United States. The kids looked forward to checking the mail everyday for a new postcard. 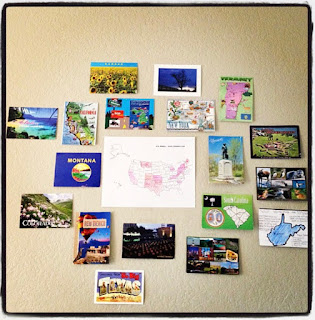 We continued homeschooling for the next 2 years as our family expanded again. This time with a girl and a boy! Social worker visits, doctor appointments, family visitation, and more therapy for the youngest 2 did not leave much room for homeschooling.

Then Joey received a diagnosis of autism and ABA (Applied Behavioral Therapy) sessions were added multiple times a week, in addition to speech, OT and feeding therapy.

Posted by Nicole {Diverging Lives} at 10:37 PM No comments: