Since I have several posts about the various areas involved in Sensory Processing Disorder, I decided to make a "home" page where you can find all of the links to the posts. Have fun searching! 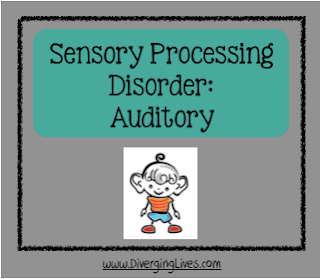 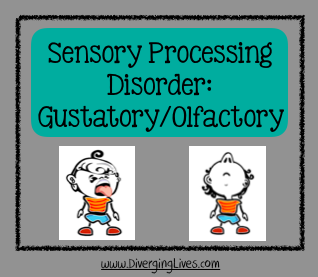 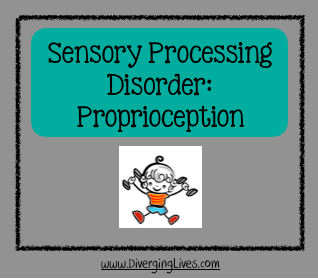 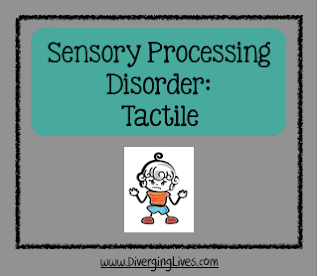 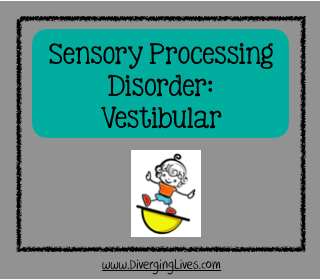 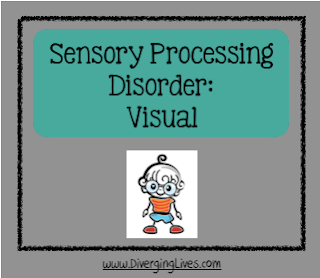 Posted by Nicole {Diverging Lives} at 5:39 PM No comments: 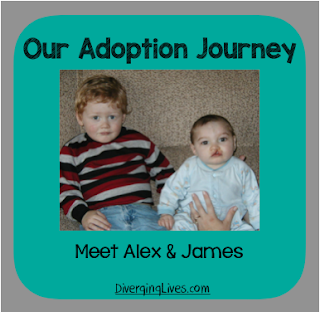 The county social worker had described the boys as: Alex is a very quiet 2 year old with curly red hair and big blue eyes and James is 12 months old and was born with a cleft lip and palate.

We arrived at the other agency and waited until the other foster mom came in with Alex and James.  Alex was really quiet and just walked around the room, trying to avoid making eye contact with anyone.  The foster mom handed James to my husband and there was an instant bond.  She spoke mainly Spanish and since Daniel was also fluent in Spanish she gave him the instructions.  James ate from a special bottle and could only eat pureed foods.  She also gave us the file that she had on the boys with the upcoming medical appointments and any information she had collected.

I ended up driving home because the moment Daniel met the boys, it became "real" to him and he was overloaded with emotions. During the car ride home, the only word Alex said was "car" as he was pointing to the other cars passing by. James was completely silent and I kept checking on him because I had never been around a baby (or 1 year old) who didn't make any sounds.

We came home and met with our social worker in the afternoon to go over the paperwork and the folders, which was all new to us.  We had to log whatever items came with the boys (mostly clothing), but I remember it wasn't much. We would have to schedule the boys for physicals within 30 days and have the physician fill out the necessary paperwork. We were given the information on visitation, which was ordered for 2 hours a week.  The social worker would contact us to schedule it once he was in contact with the biological parents.

Since it was our son's (DJ) 13th birthday we enjoyed a small family celebration that evening.  DJ commented, “They’re not leaving us.  We’re going to keep them forever.”  I reminded him that although we were hoping for that, nothing is certain with foster care and we needed to keep an open mind.  Boy was he insightful! Looking back, I remember it being a very emotionally draining day.  I can only imagine what it must have been like for the boys.

Within the first few days, the boys started bonding with us.  Alex became more comfortable, and even began calling us “mommy” and “daddy”, probably because he heard our older children call us that.  We were getting accustomed to James’ feeding and sleeping schedule, which reminded me more of a 6 month old than a 12 month old.  James began physical therapy and the therapist gave us exercises to start at home.  We also had an appointment with UC Davis’ Cleft Palate Panel and James was scheduled for his first surgery to repair his lip and insert tubes in his ears.  We were given information on several resources as well.

We went to the first visitation and, to my surprise, found out that their biological mom was pregnant and due within 2 weeks.  However, by the second visitation a week later, she had delivered another boy, Johnathan, who had also been placed in foster care.  My husband and I had several discussions regarding whether or not we could take Johnathan if one of the social workers asked.  The only way it would work for us was if we could have the 2 babies in our room.  We decided that if we were allowed to have them both in our room, that we would agree to take him.  No one contacted us so I decided to bring up the question with our social worker.  It took several weeks, but it was agreed that we could have Johnathan join his brothers in our home (after James' cleft lip surgery).  By that time, he was 5 weeks old.  Overall, he was healthy, although we were told that he had allergic colitis due to lactose intolerance.

Posted by Nicole {Diverging Lives} at 1:49 PM No comments: