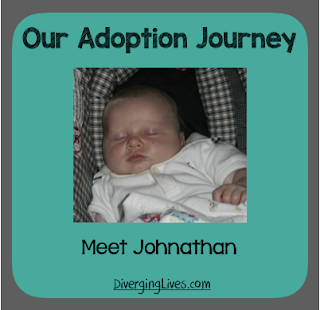 Alex and James came to us on April 29th. At our first visitation for Alex & James we discovered their biological mom was pregnant and due in 2 weeks, but by the next visitation she had already had the baby. Johnathan was born on May 5th, 2005. He was placed in another foster home straight from the hospital. Daniel and I had some discussion on what we would do if we were asked to have Johnathan join his brothers. Ultimately we decided that if the county allowed us to have both James & Johnathan in our room (in cribs) that we were willing to take him. After all, our family grew from 2 to 4 children overnight. What's 1 more?


Once it was decided that Johnathan would move to our home, things moved rather quickly. James was already scheduled for his cleft lip repair so we all decided it would be best to wait until after that was done.  Johnathan was 5 weeks old when he joined our family.

He had already been diagnosed with allergic colitis due to a milk allergy and was on prescription formula. We were able to have this formula shipped directly to our house. He continued to have difficulty with vomiting and diarrhea, as well as being very fussy.

In many aspects, having James and Johnathan was a lot like having twins. Even though they were 12 months apart in age, James was behind in development and growth. James had multiple in-home early intervention therapies: occupational therapy, physical therapy, developmental therapy, feeding therapy, and eventually speech therapy too. Johnathan was able to benefit from these services as well.

The boys had weekly visitation with their biological parents until the end of the year. The family court case continued, with the plan eventually going from reunification to adoption. We were identified as prospective adoptive parents since we had filed for defacto parents early-on. Alex & James were on a different timeline than Johnathan, since he came into care after they did. The boys also have Indian heritage so that required extra steps (tribe notification of court dates, possibility of tribe taking jurisdiction or placing the children with an Indian heritage family).
And we began looking for a BIGGER house!
Posted by Nicole {Diverging Lives} at 5:02 PM No comments: