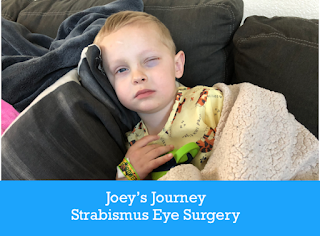 Joey suffered from a right sided head tilt from the time he came "home" at 2 months old. The medical term for head tilt is torticollis. We did exercises with him and eventually physical therapy. He didn't tolerate physical therapy very well because he did not want the therapist to hold him or touch him. Some sessions he would scream the entire time. This was prior to Joey receiving his autism diagnosis, but I was beginning to suspect it. 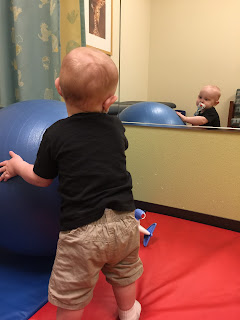 Then his in-home Occupational Therapist recommended having his vision checked. We saw a Developmental Optometrist, but at the time it was extremely difficult to perform an exam on Joey. She did however suspect that Joey had strabismus. (I reported that when Joey was not upright, his left eye would roll upwards.) This would need to continue to be followed. We were eventually referred to a Pediatric Ophthalmologist. It was then that the diagnosis of strabismus was confirmed. Again, the exam was difficult. In fact, the doctor performed the exam with Joey in the backpack carrier that we used on a daily basis due to Joey's extreme sensory processing difficulties. 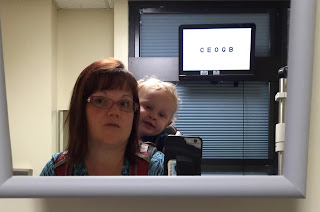 When we returned to her office around the time of Joey's fourth birthday, he was much more cooperative with the exam. The Pediatric Ophthalmologist said that it was more apparent on exam now that he has strabismus. She gave us the options of waiting and continuing to follow up on an annual basis, or surgery to loosen the upper eye muscle to help balance the eye. 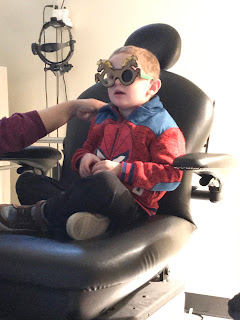 We opted to proceed with surgery. In the case it was altering his vision, we thought that correcting it sooner rather than later would be better. Also, if we could correct the torticollis before it became worse or caused permanent damage that would be an added benefit.

Joey did great through the surgical process! The hardest part was keeping him on "low activity" for a week following surgery. We made a YouTube video documenting the process. Please let us know if you have any questions or comments.