Moments to Remember was developed as a simple way to look back on our week as homeschoolers and find photos that encompass the memories we want to remember.
The week may have been tough, there may have been more bumps than smiles, but in the end these are the moments that keep us going, the ones we need to remember.

We have driven past the bowling alley frequently since moving into the rental house in December and every time we do the kids all shout "we want to go there".  Last Sunday afternoon we decided to take the family bowling just to get out and do something.  Not sure who was going stir crazy more, the kids or the parents.

Note to self: Check prices/deals online before you tell the kids.

Yeah, bowling is quite a bit more expensive than I recall.  However, the bowling alley we visited had a family deal, which cost the same as if we all bowled one game.  But, this family deal included unlimited bowling for two hours, a pitcher of soda and a large popcorn.

We warned prepared the kids, in advance, that no one would be playing video games.  We were only going there to bowl.  Imagine that!

First game went fairly well.  We had the bumpers up for the kids.  They also had ramps which helped the younger ones, otherwise their balls were having difficulty making it all the way down the lane.  (Somehow I did not end up getting pictures of all of the kids). 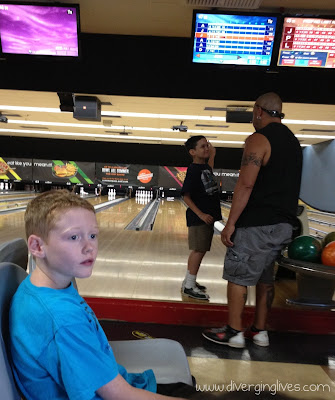 This picture is so true-to-life.  James is talking to Daddy, probably pointing out what a great score he has.  Alex is staring off due to sensory overload (LOUDNESS!). 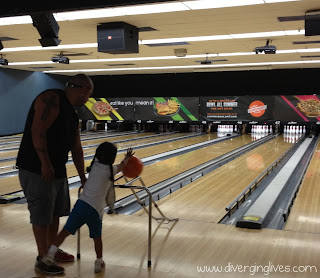 We finished the first game and still had almost an hour left of bowling time.  We figured we would try to get in a second game since it was already paid for.  Until one of our children began having a meltdown (he was even wearing his pressure vest) ... he wanted a pizza, he wanted to play video games, he wanted to do anything but bowl.  Then the ripple effect took hold.  Needless to say, we ended up leaving before our two hours were up.

You may be wondering why I would want this as a *moment to remember*.  Here are a few reasons:
We are learning to measure success by a different standard, as well as adjust our expectations.

This has been a link up with 1plus1plus1equals1.