In Route To Missouri

We knew we would have 2 days of driving ahead of us as we left Mt. Rushmore and headed to Missouri. What we didn't know is how windy it would be.  We ended up losing a hubcap to the van and the spare tire cover on the trailer somewhere in South Dakota.

While we didn't stop at Badlands National Park, we caught just a glimpse of the "badlands" from the road and they were beautiful.  They reminded me of a "mini" Grand Canyon.

We continued through a portion of Iowa and into Nebraska where we stopped for the night.  We lost another hour today as we crossed into the Central Time Zone, which made it feel like an even longer day. 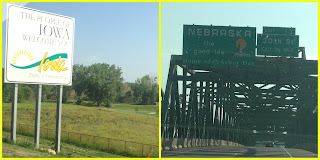 We made reservations at the KOA in Gretna (West Omaha) just the day before.  We were ecstatic to have cell service and a better wi-fi connection.  And we were finally feeling the humidity.  This KOA had a great area for the kids to play, which is exactly what they needed after being in the car all day. 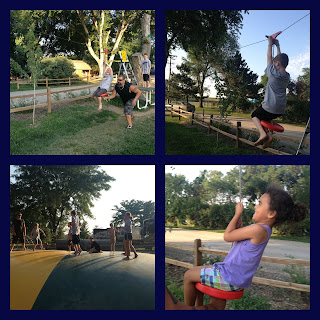 They also offered freshly-made pizza and boneless chicken bites inside the store & delivered them to our campsite.  Since we had been eating/snacking in the car all day, this was a nice and unexpected treat.  Our camp site had a little table area on a brick deck and lots of shade.  It was also a long enough site that Daniel didn't have to unhook the trailer from the van. 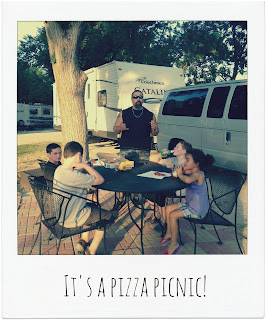 All the kids had baths and went to bed without any complaints.  They were forewarned that tomorrow is another "driving day" and we will be waking up early.  The kids are "extra" excited to arrive in St. Louis because they are aware we will be visiting a Six Flags park there.