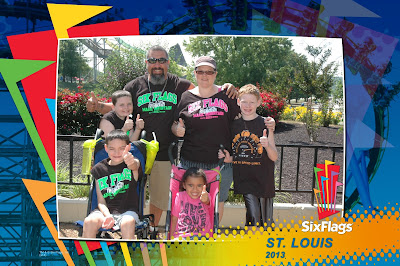 Johnathan is our resident roller coaster expert, in fact, he is a bit obsessed.  Since we have season passes to Six Flags and knew we would be taking this cross-country trip, we planned to stop at as many of the Six Flags locations as we could.  {We've already visited both of the Six Flags parks in California.}  Once Johnathan found this out, he insisted on figuring which rides were at specific parks and what the height requirements for each of the rides were.  We actually printed him a list for each of the Six Flags parks height requirements and highlighted all of the ones he was tall enough to ride. He even looked up each of the rides on YouTube to see what they do.

We were extremely pleased when we arrived at Six Flags and were able to park in a handicapped spot in the first row. The way this specific parking lot is in relation to the front gate, there is no tram and really no need for one. We stopped at Guest Relations first to get a disabled pass for the boys, which allows them access to the rides without having to wait.  Since we have James' wheelchair/stroller, it is much easier getting on rides through the disabled entrance.

Our first ride of the day was American Thunder, a wooden roller coaster.  I thought this was fun, fast and smooth. 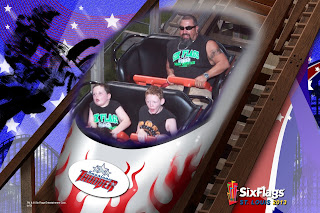 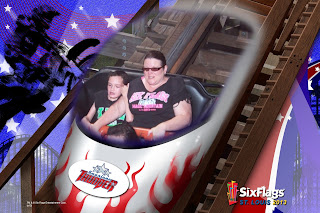 It was a hot and humid day, but we had a blast!  Both Daniel and I remarked at how friendly and helpful everyone at the park was.  Amada kept insisting she did not want to get wet, so Daniel took the boys on the log ride. 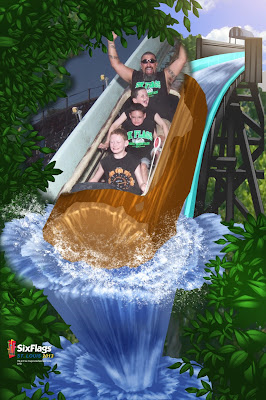 All 4 kids were able to go on Pandemonium so we let them ride without us.  It made it even since each car was able to hold 4 riders.  Well, as the kids were at the end of the ride it broke down.  I felt SO bad since neither Daniel or I were on the ride with the kids and they were stuck in the sun.  Luckily they weren't even stuck for 5 minutes.  And they didn't care because they asked to ride it again later in the day! 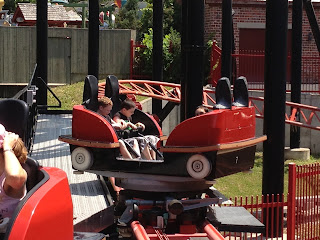 We decided maybe that was a sign we should stop for lunch.  After lunch we went on a dizzying ride and Alex wasn't feeling too good.  The ride "Dragon's Wing" was also in that area of the park and Daniel decided he wanted to go with Johnathan.  Amada really wanted to ride too and unbelievably she was tall enough. Alex wasn't too happy about not getting to ride even though he still wasn't feeling well.  I was able to take this video of them on the ride.

Daniel and the boys also braved "The Boss" which is another wooden roller coaster. However, it is taller and faster than American Thunder and more jerky. 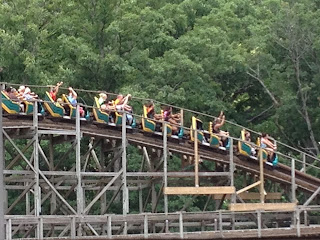 Daniel and the boys rode several more roller coasters before I was exhausted.  We decided to give our feet a break from walking and try to cool off so we rode the train around the park. It was also something we could all go on together.  Towards the end of the day all the kids wanted to go on the giant ferris wheel, Colossus, which once again we were all able to ride together.  We enjoyed the beautiful views from WAY up there. 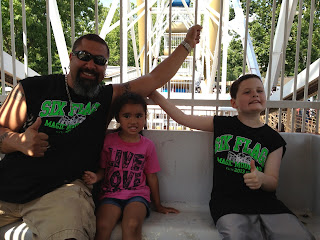 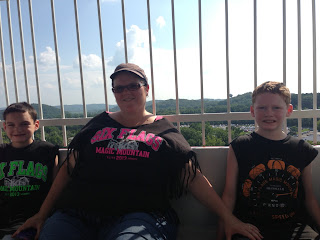 Before we left the park, we decided to get on the big inner tube water ride to help cool us off.  Amada went kicking and screaming, but was happy once she did not have to go under the waterfall.  We were done at the park by about 5pm, just in time to discover Steak 'n Shake {yummy!} before we headed back to the KOA for a swim.

Tomorrow we will head into downtown St. Louis for a tour of the Arch and a Riverboat Cruise on the Mississippi.