Today we had a short driving day to New Jersey.  We are staying at Timberland Lake Campground because it is only 2 miles from Six Flags.  However, I personally would not recommend this campground. The road into and inside the campground is a dirt road and extremely rough with a lot of pot holes.  The entrance was gated and looked nice.  There was a pond with fishing docks.  The front area of the campground contained the office, a playground and the pool area which was large with lots of chaise lounges.  On the way back to our space we noticed several trailers that appeared to be permanent, but were run down and cluttered.  In all honesty, we really didn't explore the campground because all of the amenities were so far from our trailer and we were sightseeing so we didn't have much free time. 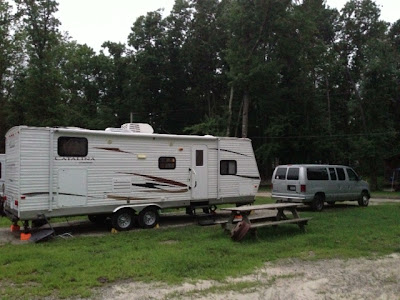 We set up the trailer then decided to drive into New York City.  Both Daniel and I wanted to see the Statue of Liberty so we drove to Liberty State Park which is actually located in New Jersey.  The only way to get to Liberty Island, where the statue is located, is by ferry.  After hurricane Sandy, Liberty Island reopened to the public on July 4th, 2013.  We decided we would just view the Statue of Liberty from Liberty State Park and not take the ferry because we arrived later in the day.  Even still, it was amazing! 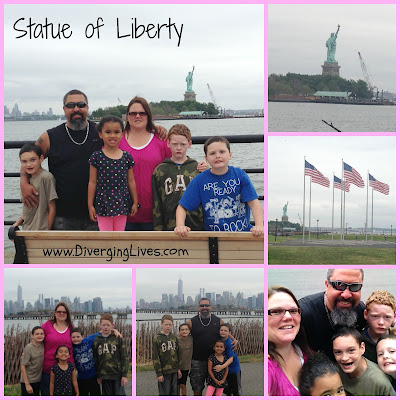 Then we decided we would drive into NewYork City to have a look around, maybe get something to eat and drive by ground zero.

I am not sure what we were thinking because it ended up being rush hour (again!).  As soon as we came out the other side of the Holland Tunnel it was a nightmare.  I tried looking at google maps to get us to ground zero and we came within a block or two (I think), but there was nowhere to park.  Then people started walking out in front of our car, cars were driving all over the road with no attention to the lanes, a million cars were honking, and there was road construction.  Daniel says just get me out of here!

Once we were back in New Jersey, we were all able to relax a little.  It's a good thing because tomorrow is Six Flags New Jersey and I have heard a lot of great things about that park.