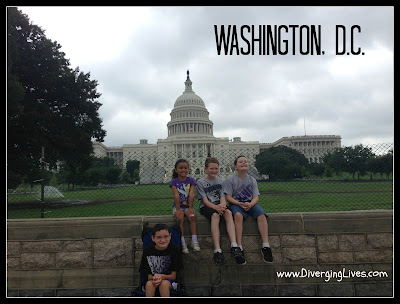 We rode the KOA shuttle bus into Washington, D.C.  The ride took approximately 45 minutes, but it was the weekend so there wasn't much traffic.  Daniel enjoyed not driving and it was nice getting dropped off and not worry about parking.

We were dropped off in front of the capitol building and decided to walk to as many of the Smithsonian museums as we could.  We made a list of the museums we wanted to visit in order of importance because we knew we wouldn't make it through all of them. 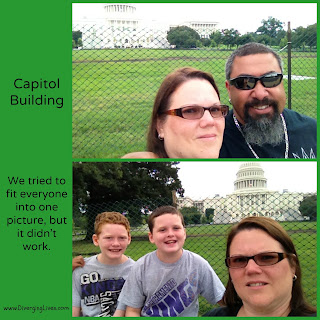 We walked through the outside gardens at the Botanic Garden as it was not open yet and we were in search of a restroom.  Our first stop was the Natural History Museum.  I figured the boys would like it since it has dinosaurs.  I think they were a little bit scared.  I couldn't get them to turn around and look at me so I could take their picture with the triceratops.  I kept saying, "It's not real, only pretend." Yeah, they still wouldn't turn around. 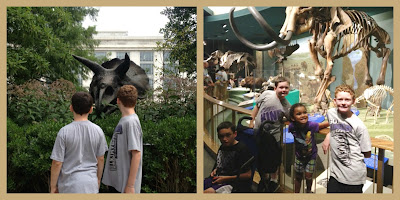 There were so many various displays offered.  We tried to walk through both floors catching a glimpse of some of it.  One display we found intriguing was Genome: Unlocking Life's Code.  You actually get to figure out your genetic code based on traits you either have or don't have.  We also ate lunch here as everyone was hungry.  They offered a wide variety of food choices, but were a little expensive.

Next stop was the American History Museum.  The display of the Star-Spangled Banner (almost 200 year old flag) and the story of how Francis Scott Key was inspired to write the song are awe-inspiring.  There is no photography allowed to help preserve the flag, but the museum has shared some pictures via flickr.

We also enjoyed the America on the Move display which showcases all modes of transportation in chronological order.  Check here for learning resources if you are planning a visit. The first cross-country car trip was in 1903. The map and typical car/conditions are pictured below, along with the first travel trailer. 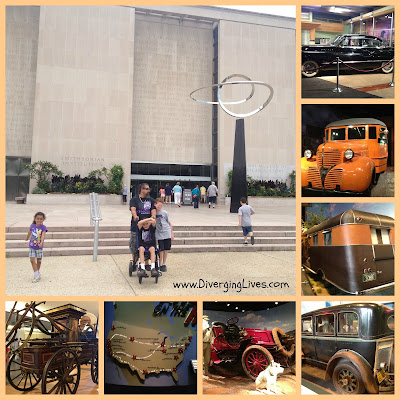 This picture above of Daniel and the kids was taken as we were leaving the museum and is a true depiction of what was happening.  We were losing the kids.  What in the world were we going to do for the next 3 hours until the shuttle bus came to pick us up?  Here's how we managed to kill some time.

We walked by the Washington Monument, which is closed for repairs due to the earthquake in 2011. 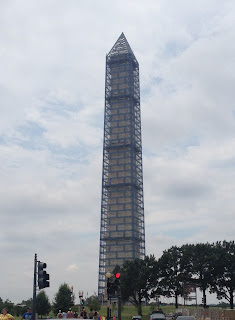 We had an ice cream snack while sitting on a bench in the shade in front of the Smithsonian Castle.

We watched a street performer play the drums on a bunch of buckets & shopping carts. 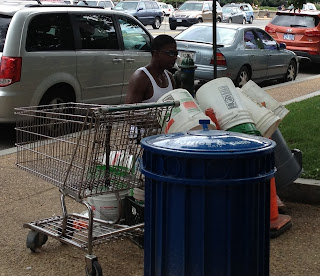 I think we found the world's smallest McDonald's.  It was too cute not to take a picture of it. 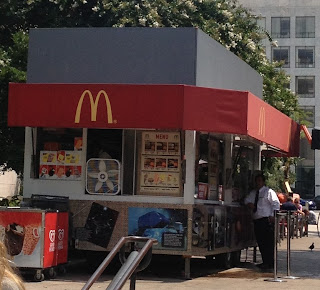 We visited the Air & Space Museum.  This was by far the most crowded of the museums.  We didn't really walk around and look at much because all of our feet were killing us.  Since there is a planetarium and an Imax theater we figured we could all sit and relax while we watch a short Imax movie.  It was about the astronauts and followed them on a mission in space.  Once we were done with that it was time to start walking back to where we would be picked up in front of the capitol.

On the map all of these museums appear to be rather close together, but when you are walking to them with small children they seem miles apart.

Here's a nice picture I captured of the Ulysses S. Grant Memorial and the Capitol Reflecting Pool. 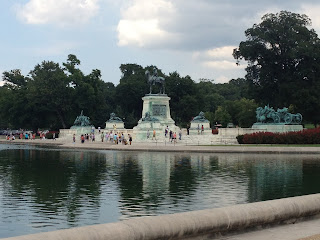 We found a bench and waited about 10 minutes for the bus to arrive and wouldn't you know it, as soon as we boarded the bus it started pouring down rain.  I am very grateful it held off until then.

At bedtime, no one had any arguments about going to sleep.

P.S. I wish I had known about this when we went, but there is a junior ranger program available at the National Mall.  If you print out the handbook before you go maybe the kids will stay more focused, plus they can earn a junior ranger badge.