After a day of rest from all of the walking, we were ready to tackle it again.  This was our final day (Day 3) of Disneyland/California Adventure and it ended up being the hottest day also.  We decided to begin in Cars Land.  All I can say is, "Wow!  It truly feels like you have been transported into the movie."  I was completely amazed at all of the attention to detail, but slightly disappointed that there were only 3 rides in Cars Land.  And it was packed full of people!!


Next onto Luigi's Flying Tires ride.  This was a different, yet interesting concept.  Air is generated through the ground to help your tire glide.  You have to lean in the direction you want your tire to go.  Then there are gigantic beach balls flying around.  If you are lucky enough to catch one, you can throw it at another flying tire rider. (Tip: Grab a beach ball before the ride starts.)
Yes, the wait for Radiator Springs Racers was 270 minutes.  Luckily we were able to get a fast pass to come back later in the afternoon.

Amada and I, along with grandma and Michael, waited in the shade while everyone else rode the Tower of Terror. 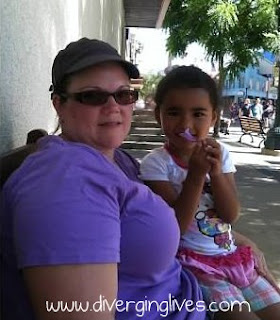 We even got to see the red trolley come by and Amada was very excited when Mickey Mouse waved at her. 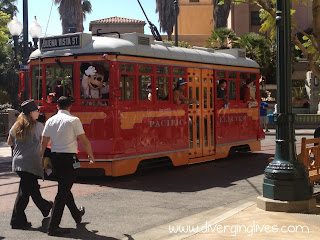 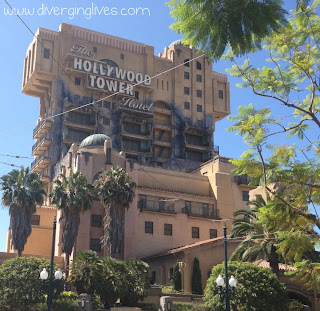 They ran into Stitch as they were getting off the Tower of Terror, so they stopped for a quick photo opportunity.  Johnathan was wearing his pressure vest today for extra help regulating his body due to all of the over-stimulation. 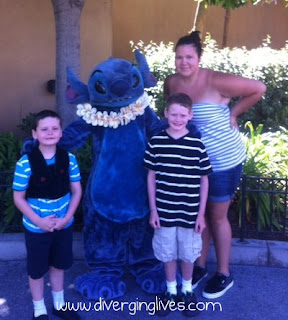 I knew I wanted to take everyone to the Rainforest Cafe once while we were here so we made reservations ahead of time for lunch.  It's a good thing we did because it was just what we needed to relax and cool off.  We warned the kids of the "thunderstorms" every 20 minutes and they actually did really well. 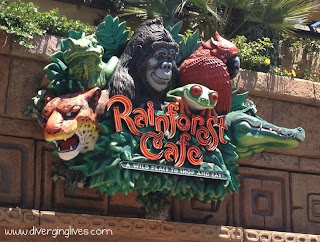 Our table was situated in a corner right next to a large fish tank.  We sat the kids facing the fish so they could have some entertainment while we were waiting.  The food and service were excellent and definitely worth the walk all the way through Downtown Disney. 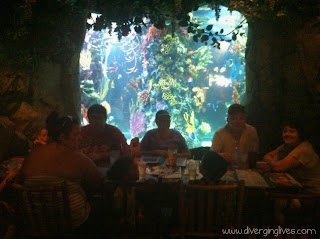 It was time to use our fast pass for Radiator Springs Racers.  We ended up waiting about 30 minutes.  Not too bad!  The cars seat 6 people and since we had 8 people, we split up into 2 cars.  The cars are on a track and steer themselves like a roller coaster.  At one point during the ride, you race the car next to you. The boys loved it!  I think James laughed through the entire ride. 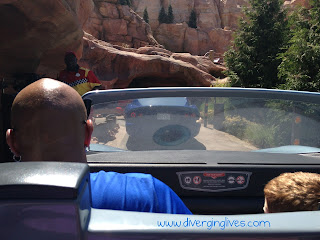 Johnathan had to go on California Screamin' again, so everyone went with him except Amada and I. 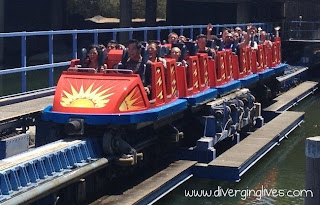 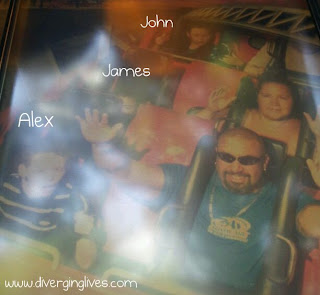 We went back to the trailer to cool down, rest and eat dinner.  Originally we were all going to try to go back to watch the light show and/or fireworks, but Johnathan was having a hard time keeping it together so I stayed at the trailer with the 3 youngest kids and Daniel went back with the 3 oldest.  I was really tired too and was asleep when they got back later that night.  They were able to catch most of the light show and some fireworks!


Our family had a wonderful visit to Disneyland and California Adventure!  We made lots of memories and the kids are already asking to go back.  I don't think it will be anytime soon, but it was great while it lasted!

Say tuned next week for our last stop of the vacation.  I'll give you a hint: it's further south than Disneyland.