Yeah, I know. That's a mouth full.  We became familiar with that term when our daughter was diagnosed with vesicoureteral reflux (orVUR) at 18 months.  She had chronic ear infections from birth and was on antibiotics constantly to treat ear infections until she had ear tubes inserted at age 2.  I believe that is why she did not have her first UTI diagnosed until she was 18 months old.

She had just finished another round of antibiotics (Augmentin) for an ear infection and she came down with a fever.  A high fever.  It was up to 105 and she was miserable so I took her to the emergency room.  She was diagnosed with an ear infection and given a prescription for Zithromax.  She'd had many ear infections but never with a fever like this.  When I explained this to the doctor, he dismissed me.  I was told that if her fever did not improve within 48 hours of being on the antibiotic she should be seen again.  It seemed like she was improving slowly and then on the 2nd day her fever spiked again.  This time it was 104.  We went to a different emergency room.  {Of course both times it happened after the doctor's office was closed.}  I noticed that when she urinated, she screamed.  I reported this to the doctor who suggested they catheterize her to collect a urine sample.  Within an hour the doctor came back and reported that she had a severe bladder infection (lots of bacteria).  She was given an injection of Rocephin before we left the ER and a written prescription for Keflex.  She began the antibiotics and seemed to be doing better.  Then again on the 2nd day she woke up screaming at midnight.  She slept off/on with me until 4am when she began screaming again.  She still had a dry diaper from the night before.  I called the on-call doctor and requested to have her admitted to the hospital.  He replied, "I wouldn't know how to do that."  {Really?}  I told him she had already been seen in the ER twice and I wanted answers.  He condescendingly told me that they have urgent care hours in the office to prevent emergency room visits and that I could bring her into the office at 8am.  As I was packing her things to head back to the ER, she finally urinated and calmed down almost immediately.  I decided to wait and take her into the office at 8am.  When the office tried to locate a urine culture that the 2nd emergency room was supposed to do, they discovered that it had not been done.  There was no way to know if she was on the right antibiotics.  I was advised to continue her current antibiotics.

Six days later she woke up with a fever again and crying with urination.  I called the pediatricians office and got her an appointment right away.  A urine sample was collected and the urinalysis showed bacteria so a different antibiotic (Sulfa) was prescribed.  A urine culture would be done and I was instructed to call the office in a couple of days to check on the results.  The results showed that the antibiotics she was currently on should clear up the infection.  I was advised to have her urine checked 48 hours after she finished the antibiotics to make sure the infection was gone.  Some follow up tests were also ordered: a VCUG (voiding cystourethrogram) and an ultrasound.

I found this website (kidneyreflux.info) that has a ton of information about VUR and other families' stories.

What is VUR?  Vesicoureteral Reflux (or VUR) is a condition in which the urine abnormally flows back up into the ureter or kidney and can cause infection.


VUR itself is not dangerous, it's the repeated infections that can harm the kidneys.  VUR can lead to infection because the urine that stays in the urinary tract can be a place for bacteria to grow.  There are 5 grades of VUR (I-V), with I being the mildest and V being the worst. 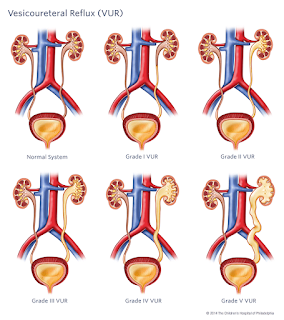 During our daughter's VCUG, it was discovered that she had grade III vesicoureteral reflux on the right side.  This was only seen as she was voiding (peeing).  She was prescribed a low dose of antibiotics daily to prevent infection and referred to a pediatric urologist.  We were told with grades I-II, kids most likely outgrow it by the age 6-7 years.  With grades IV-V, kids oftentimes need surgery to correct the reflux.  With grade III, it could go either way.

Our daughter had her first set of follow-up tests (VCUG and ultrasound) earlier this year and she still had grade III VUR on the right. Additionally, her right kidney was starting to fall behind in growth, compared with her left kidney.  The good news is that she hasn't had any further infections on the low dose antibiotics.  The urologist has given us clearance to go off the antibiotics, but if she develops any symptoms of a UTI to been seen immediately.  I have been totally hypervigilant about taking her to the doctor with the development of any fever so this won't be any different.

We will return for more follow up tests (VCUG and ultrasound) after the beginning of the new year and we will see where things stand with the urologist.  For now, we wait.

If your child has had any bladder or kidney issues, I would love to hear from you!  Was the testing more traumatic for your child or you?