Therapy Thursday: Handcuffed By The System 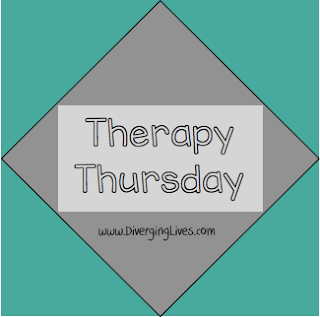 Each week I will post about some type of therapy we use, who recommended it, and the reason we are using it.  Remember, I am not a licensed therapist and I am sharing our experiences. We would love to hear your stories also. Please feel free to let us know in the comments!
Handcuffed By The System

We, as parents, want the best for our children right?  Well what do you do when you've tried your best but it still isn't enough?  Our 7 year-old son, Johnathan, was placed in our home as a foster child when he was 5 weeks old.  We requested he be placed in our home because we also had his 2 biological brothers.  We eventually went on to adopt all 3 boys (that's another post), but the story doesn't end there.  We always knew the boys were placed with us for a specific reason and that we were "called" to be advocates for them, but there was no way of knowing in what capacity that would be.

Alex and James both had extra needs, although at the time all we were aware of was speech delay, cleft lip and palate and motor delays.  They were both receiving various weekly therapies.  In fact, James had his first surgery to repair his cleft lip the week before we welcomed Johnathan.  We were told that Johnathan had allergic colitis and was doing better since he was switched to a hypoallergenic formula.  During the first year and a half Johnathan was meeting all of his milestones a little late, but still considered to be in the average range (i.e. walking at 14 months).  He was such a cute baby and received smiles from everyone!


Soon after Johnathan's adoption was finalized (at the age of 2 1/2) we became concerned that he was not progressing as he should developmentally.  We also noticed that he would cry inconsolably for hours and truly not know what he wanted or needed.  He was constantly on the go and didn't sleep much.  He began therapies for speech and OT.  We consulted a neurologist who, after some testing, thought Johnathan had PDD-NOS (a mild autism spectrum disorder) and may have been exposed to substances prenatally, as well as gave him a diagnosis of mood disorder.  He was started on a mood stabilizer and life became more manageable, for a while.

Fast forward 5 years.  We have been treating with several different psychiatrists (as dictated by insurance) for the last 3 years.  Johnathan has had periods of time where he has done better than others.  He has officially been diagnosed with ADHD, anxiety, a mood disorder, sensory processing disorder, and a learning delay.  His kindergarten year was especially difficult for him due to all the stress in a regular classroom and him not being able to articulate his needs.  We did not receive much support from our school district and ended up having 4 IEP's without much progress.  We made the decision to homeschool all of the boys (Yikes!).

This last school year we were able to bring the joy back into learning.  We are able to incorporate self-help skills (such as toilet training), community awareness (by taking many field trips), therapy (fine motor, gross motor and speech) and so much more into our daily routine.  But life is still difficult for Johnathan and in turn he makes it difficult exhausting for those around him.

We had been searching for behavioral support and finally received such help about 6 months ago.  Our behavioral therapist was excited to work with us because we had already done so much research and implemented many strategies on our own.  He basically encouraged us to continue what we were doing.  Then came the dreaded phrase.  You guys are really handcuffed by the system.  The more intensive behavior program that Johnathan would benefit from, he doesn't qualify for.  Why doesn't he qualify?  Because he has never been hospitalized (or even evaluated for hospitalization) for mental health.

I am a very pro-active person and I like to catch things early and cut them off at a more manageable point.  Evidently our insurance doesn't view mental health services the same way.  Things finally became so bad around here that we took Johnathan in to be evaluated.  All it took was a 15 minute question/answer session with a mental health worker and we were granted access to TBS (therapeutic behavioral support).  We've basically only had 1 week of services so far but we are amazed at the amount of knowledge and experience our therapist has.  I think he may even have a set of wings on his back.

Have you ever had to be creative in order to secure services for your child?  How so?  If you have received behavioral support for your child, was it helpful?  What did you learn that made the most improvement?